get the balance right


interview with Matthewdavid at the Ableton blog
Posted by SIMON REYNOLDS at 11:51 AM No comments:

I wish there was footage on YouTube of 'Blade being the guest musical act on Pebble Mill At One  in '85 i think it was. Pebble Mill being this very middle of the road, lunch-time TV show aimed at the older, squarer crowd i.e. the kind of people likely to be at home at midday  -  and which I wouldn't normally watch except Stubbs had left his TV with me when he went home to Leeds for the summer and it had this terrible, corrupting, life-devouring effect on me -  then claiming supplementary benefit after graduating - I would switch it on as soon as I entered my digs. Thank God David came back and took it off me!) But yes, this edition of Pebble Mill stuck in my mind because one of the girls - Rose, I think - was dressed head to foot in skin-tight rubber. Or maybe it was leather. At any rate a serious Skin 2 type fetish outfit. That overt kinkiness was the first occasion it occurred there was anything more going than the squeaky-clean cutesy-poo retro-Sixties shtick, which hitherto had been redolent of nothing so much as Dolly Mixtures.

But  really the 'darkness' and 'magick' (later to flower in Rose's solo career and collaborations) is really not present at all in the music, is it, at this stage...

The other contemporary things this sound / look would be in alignment would be Talulah Gosh, We've Got A Fuzzbox and We're Gonna Use It, perhaps  Dream Academy a little, perhaps Virginia Astley slightly, Danielle Dax slightly...

"Strawberry Switchblade" is one of the first examples of the  sweet/cuddly word juxtaposed with violent/scary word aesthetic in indiepop isn't it?


Posted by SIMON REYNOLDS at 9:57 AM No comments:

Notes for A Future Study of New Wave

a few of the micro-essays so far


forthcomings to look forward to


Aghast, though, at the non-presence of this in the forthcomings list:


Posted by SIMON REYNOLDS at 12:13 PM No comments:

Labels: HILOBROW, NOTES FOR A FUTURE STUDY OF NEW WAVE

in memoriam Sandbrook (who's probably still with us and involved in Momentum)
Posted by SIMON REYNOLDS at 9:15 AM No comments:

only when i'm dancing do i feel this free

"My favorite viewing, and this is the first time I have ever admitted it to anyone, but what I love to do, when I don’t watch evangelicals, when I can’t read or write and can’t go out walking, and don’t want to just tear my hair and destroy myself, I put on, here in New Haven, cable channel thirteen and I watch rock television endlessly. As a sheer revelation of the American religion it’s overwhelming. Yes, I like to watch the dancing girls too. The sex part of it is fine. Occasionally it’s musically interesting, but you know, ninety-nine out of a hundred groups are just bilge. And there hasn’t been any good American rock since, alas, The Band disbanded. I watch MTV endlessly, my dear, because what is going on there, not just in the lyrics but in its whole ambience, is the real vision of what the country needs and desires. It’s the image of reality that it sees, and it’s quite weird and wonderful. It confirms exactly these two points: first, that no matter how many are on the screen at once, not one of them feels free except in total self-exaltation. And second, it comes through again and again in the lyrics and the way one dances, the way one moves, that what is best and purest in one is just no part of the creation—that myth of an essential purity before and beyond experience never goes away. It’s quite fascinating" - Harold Bloom, 1991
Posted by SIMON REYNOLDS at 11:42 AM No comments:

Delia Derbyshire soundtrack available for the first time on vinyl  (or indeed any format) via Trunk Recordings! 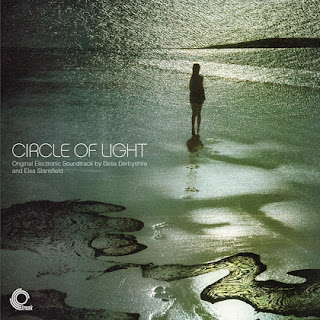 
"There is nothing quite like Circle Of Light. It’s a 32 minute colour film shot in 1972 by Anthony Roland, featuring the photography of Pamela Bone, with a groundbreaking soundtrack by Delia Derbyshire and Elsa Stansfield.

The origins of the film can be traced back to 1952 when Pamela Bone, a student at Guildford School Of Art, bought her first camera for £6. This was the start of a long symbiotic journey with photography, Bone developing peculiar techniques, adapting cameras and always trying to somehow replicate the visions she had in her mind’s eye. She would enlarge shots, combine images and transparencies, fiddle with exposures, learn her trade.

After briefly studying with André Thévenet in Paris and having work published in Photomonde, she returned to the UK and started approaching advertising companies. Working in that business she had to fully understand all modern Agfacolour print processes, but Bone always felt her work faired better left as transparencies, not as prints. In 1959, and having had work featured in Vogue, Queen and House And Garden, she was invited to stay with a student friend in Calcutta. It was her escape.

The trip enabled Bone to travel and photograph extensively in exotic locations across India, including Sikkim and Kashmir. On returning home, she began working on a conceptual slide show of her travels and transparencies, one that began to slowly morph over the next seven years into a show of slides influenced by travel, the seasons, children, still life studies and landscapes. The working title of the show was Circle Of Light. Her slides and techniques were unique; she’d blow up images to use as textures behind other images, she’d put black and white images behind colour ones. The results were often extraordinary, baffling, and deeply engaging. She took lessons in sound recording too, but things took an unexpected turn in 1969 when she was introduced to Anthony Roland by art critic Marjorie Bruce-Milne. Roland was an art collector, a cutting edge director and had opened his 400-seater Art Film Centre, at 6 Leicester Place in London. He’d gained quite a reputation for not only his own productions but for long programmes of important art films and premiers.

On the winter’s evening they met Bone presented her work to Roland, and they spent hours stood under a street light in nearby Leicester Square – a very different place to the one you may know now – gazing at her glass slides. Roland was quite overwhelmed by the images in many ways and suggested he made a film with them. Together they began work on Circle Of Light.
Bone had also written poetry and wanted this narrated over the film. But Roland knew that the images needed something a little more abstract. So for a soundtrack Roland commissioned Delia Derbyshire (moonlighting from the Radiophonic Worhshop). They had recently met via designer Lucienne Roberts, and with the help of artist Elsa Stansfield (pre their founding of Electrophon Studios in 1973) Derbyshire brought together numerous elements for the soundtrack. Roland wanted something new, different, mysterious.

The finished film has no narration apart from Bone’s introduction, and focuses intensely on her unique glass transparencies. The narrative is controlled by Roland’s signature slow tracking style; with calming drifts across glorious, intense images of beaches, trees, forests – landscapes and still lives too, with gradual mixes and all perfectly accompanied by Derbyshire’s collaborative electronic soundtrack with effects.

Circle Of Light premiered at the Academy Cinema in Oxford Street on 28th March 1972, and three months later was selected to represent Great Britain in the Art Film class at the very well respected Cork International Festival. It won first prize, the soundtrack credited in the festival programme to “Delia Berbyshire and Elsa Stansfield”.

The film was again chosen that year to run at the Melbourne Festival, as well as Buenos Aires, Chicago, Locarno and Lyon. It kept running in London, and has since been added to national film collections in the UK (at the BFI and V&A), Paris, Berlin, Jerusalem as well as libraries and universities across the USA.

There have been very occasional sightings of the film over the last few decades, but it has come into focus more recently because of the unreleased music and the dramatic rise in interest for all things Delia.

Thankfully here we now have the first ever release of what is believed to be the longest of all surviving Derbyshire works. Although made in 1972 it feels staggeringly contemporary today. Derbyshire followers will immediately spot the characteristic use of her “lampshade” sound, but here it’s subtly and unexpectedly interwoven with field recordings and full of most unusual - dare I say - proto “ambient” ideas and techniques. What’s so perfect is that Roland put Bone and Derbyshire together, both women were pioneering in their chosen fields and employed similar techniques of sampling, mixing and alteration to create new and different results.

As far as I’m concerned this soundtrack is a recording unlike any other of the time – a sonic tapestry of taped drone, delicate shaped electronics, birdsong (including an owl), other field noises and all “sound designed” to fit the Bone photography and Roland’s aesthetic linking. Other artists such as Basil Kirchin were also experimenting with tape and natural sounds around the same time, but there is something altogether different about the Derbyshire / Stansfield approach, which may have been influenced by the Bone imagery, but could well be down to their fabulously modern feminine take on sound and its future. Sadly both are no longer with us so we will never know how they made it or how they worked together, but luckily now we can just turn it on, enjoy it and drift away speculating."

Posted by SIMON REYNOLDS at 10:44 AM No comments: