(not a new incarnation of Pulp with Jarvis displaced by Johnny)

A potential micro=genre suggested by the chance hearing of this (off the second Mekons album, 1980)

Killing Joke - contrary to opinion voiced by some, they are one of my favorite groups of the entire p-p era, indeed I saw them twice which is something I can't say for any other bands of that time (Friars Aylesbury around the first album, Dunstable circa Fire Dances) but KJ at the very start were distinctly PiL-indebted.

(Youth was a bit of Vicious parody though, in terms of his look / mien )

Ah now, this next one is an actual parody / pastiche (but also I'm sure a tribute - the sincerest form of flattery)

Who else is there in the realm of PiL-homage?  Not just being inspired by them (loads of examples there) but actually rather slavishly copying the sound...


MONOPHONIE from Phillip sollmann on Vimeo.

Music for selected Instruments of Harry Partch, Sound Sculptures by Bertoiastudio and a Double-Siren of Herrmann von Helmholtz

reviewed at Frieze
Posted by SIMON REYNOLDS at 3:44 PM No comments:

Posted by SIMON REYNOLDS at 3:44 PM No comments:

Don't ask me why - given that my funds for buying records were restricted in those days - but I bought the Gabi Delgado solo album back in 1983 (?)

I think it might have been on one of those first-weeks-of-release Our Price discounts, 2.99 or even 1.99 jobs. The discount no doubt facilitated by the record company in hopes of getting it to enter the charts. That was a thing then, although more with 12 inch singles as I recall.

At any rate I took it back a week later and either made up some excuse and got a refund, or perhaps Ijust sold it on at the second hand place in Oxford, recouped some of the loss and applied to some other purchase. I can't remember

It wasn't very good - not a patch on the proper DAF albums I had taped off of Stubbs.

But not much better...

Gabi again - watch out for the strobing video, if you suffer from epileptic tendencies

Ever so cute, but not a great dancer really.

No, they were much, much better together, DAF.

And Morley of course was a big fan, wrote a few sex-pol orgasm-as-revolution paeans to them, in his  homoeroticism-aspiring mode (see also paeans to Pete Murphy's lips, Kirk Brandon's ears, David Sylvian's being too fragile to fuck) 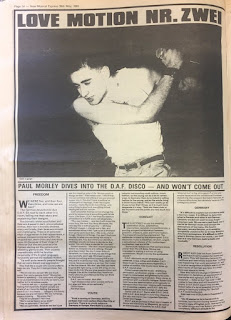 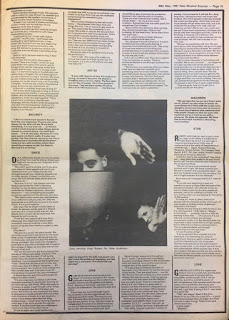 In a way, Propaganda was his consolation prize, or proxy - "this time, let's make it happen in the UK too".

Posted by SIMON REYNOLDS at 11:36 AM No comments:

Posted by SIMON REYNOLDS at 11:34 AM No comments:

Posted by SIMON REYNOLDS at 11:34 AM No comments:

Also produced a couple of Tomita albums, including my favorite The Planets, which includes this marvel of stereophonia

Although that said, the version on YouTube appears to actually be in mono, annoyingly!

Worth searching out on vinyl (and be sure to go with the 1976 original, rather than the later digi-ed up revisiting)

Like the mispelling of the title there - "dawn chores"!

In terms of his own music, however, Electronomusic was Pfeiffer's only recording, sadly

Never noticed before the cool parentheticals behind each title:

Warm-Up, Canon And Peace [For Inharmonic Side Band] 7:28
Reflection Of A String [For Contraformer] 3:07
Drops [For Programmer And Sines] 2:47
Moments [Events For Parametric Blocks] 6:37
Take Off [For Metric Transperformer] 3:32
Forests [Modes For Alphormer And Set] 12:52
Pavone [A Duotonic Transform] 3:20
Orders [For Sequential Sines] 5:45
After Hours [For Ordered Simpliformer] 3:05
Posted by SIMON REYNOLDS at 11:34 AM No comments:


Posted by SIMON REYNOLDS at 11:33 AM No comments:

Posted by SIMON REYNOLDS at 11:33 AM No comments:

Posted by SIMON REYNOLDS at 11:33 AM No comments:

middle bit of this (from about 3.22 in), aka, "Danse", gets quite proto-junglistic

Posted by SIMON REYNOLDS at 11:32 AM No comments:

objects in the rear view mirror are closer than they appear

Labels: 1978, DIRE STRAITS, NOTES FOR A FUTURE STUDY OF NEW WAVE, ONLY ONES, ROCK MUSIC, TELEVISION

another promo, another Perrett

cf the earlier post about a disappointingly poor video for a great great song, this is not anywhere in the same league, song-wise, but the video - simple as it is - does capture / convey  the glow of the young Perrett (before too many long journeys wore out his beauty)
Posted by SIMON REYNOLDS at 11:31 AM No comments:

Labels: NOTES FOR A FUTURE STUDY OF NEW WAVE, THE ONLY ONES


Like "Workin' In A Coalmine", another working man blues

"somebody doin' something slick / yeah they are"

wage-slave en route to an early grave, the graft getting to feel so futile

"might as well go uptown / and dig a ditch"


And how about this for "this shit is systemic" analysis - from the preamble to "Ain't That A Bitch":

“Everything is outta pocket! / Somebody do something! / The present situation is abstract!”


One thing I quite like in an artist - admire the shamelessness, maybe, or the canniness, not sure which-  is that thing where they have a hit, and they immediately try to have another hit that is essentially the same song: thematically, sound, feel, stance, emotion.

Johnny 'Guitar' Watson doesn't go quite that far with "Real Mother For Ya", but it is essentially "Ain't That A Bitch Pt 2"

Actually, "Ain't" was never a single as such, but it was the killer tune on his first really successful album, so in that sense fits the syndrome

I bought these tunes some time in the early Eighties, I think they were rereleased as flipsides of the same 12-inch or something like that. (Or maybe not - can find no trace of this on Discogs. Perhaps they were separate rereleases).

Never got around to the albums though.

This is the one where some claim he's inventing rap


Another real-talk, cost-of-living, themed tune, in a way.

Also quite like that thing where  musicians (this is particularly common in black music, but really in most music if you think about it) just fairly brazenly jump on the latest sound - - and keep on jumping on the latest sound, successively if not always successfully.

(It's a different angle on the "work aesthetic" theme - this music thing isn't some higher calling or anything airy-fairy like that; it's a job, a livelihood, my means of production, and I gotta stay competitive in the changing market).

I suppose he's trying to do a George Clinton / Zapp with this next  tune, sonically,  while also striking a "microchips gonna put all of us outta work" stance, lyrically. A/k.a having your cake and eating it.


stop press: an entire essay on the "proletarian funk of Johnny 'Guitar' Watson" by Dominick Knowles at Viewpoint


Posted by SIMON REYNOLDS at 9:37 AM No comments:

Man, I used to love this song

The radio memory - the 'pick axe' snap of the drum cutting right through the sound  - the whole track sounded so odd, so minimal -  clanking mechanistic blues, the grind of regimented labor rendered as joyous celebration.

The flipside of "work" as dance music / club culture buzzword - in this case, for once, literally referring to labour... the travails of being a fleshly "appendage attached to the machine".

You can see why Devo wanted to do it

Although they did a pretty dreary job with it really - or perhaps simply redundant, they couldn't make it anymore rigid or machinic

Bought that Charley collection of Lee Dorsey tunes with the Joe Strummer liner note (literally a note - hand scrawled!) perhaps a year or two after it first came out 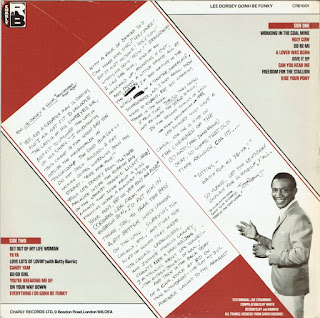 Great stuff, but nothing quite as odd and emaciated as "Working in the Coal Mine"

Actually probably the next fave was really "Ride Your Pony" -  pumping, so tight.

"Lord I'm so tired
How long can this go on?"

But Dorsey knew about hard 'n' dirty work and the man-machine interface, what with running his own auto repair shop. A job he went back to during the dry spells between hits.

"He was a body and fender man when he wasn’t singing and even at his peak, when he would come off the road at the end of a successful tour, he would go and get into his grease clothes, his dirty work gear and go and work on cars. Straightening out fenders and painting bodywork" - Toussaint.

Posted by SIMON REYNOLDS at 8:52 AM No comments:

supposedly the very first recording done under the influence of LSD - made in LA in 1966, sold only by mail order, so the story goes

i'm suspecting a spoof, prank or con job executed long after the historical fact - but if it's a fakesimile then it's a rather convincing and entertaining one, with the excessive echo redolent of the long version of "Time Has Come Today" by the Chamber Brothers
Posted by SIMON REYNOLDS at 10:38 AM No comments:

one Leonard Rosemann responsible for the score and electrono-sonix

the graphic look of the credits is great too

overall, it's a surprisingly still-cool-looking film, with moments of real beauty and wonderment