we did have dance music in the British Isles, you know, before jazz

not very funky dance music admittedly, but rhythmic movements to an explicit or implicit beat

the music was added later to these creaky old films, a bit of which i first saw on Ken Russell's In Search of English Folk Song, which is very eccentric but heartily recommended


Posted by SIMON REYNOLDS at 2:51 PM No comments:

mouth music (bit of a cult)

One of those projects where you think "all that technological ingenuity, all that studio expertise - and this is what you came up with?"

Definitely something where the back story / modus of making is more interesting than the front story / actual end product.

Met Todd R once - in a bar in Oslo with some Norwegians. He's a cult figure there. As he is in many places.

It's odd interacting with a musician who is a legend but towards whose work you don't have a particularly strong feeling.

I mean, A Wizard A True Star is great, amazing, "how did he do that?" etc - but you know what: I never listen to it.

Got it on vinyl for 3.99 at the Virgin Megastore in the Eighties, having gleaned a sense of its reputation from the writings of certain admired critics. Played it just the once, I think.

Later a CD version that belonged to my brother ended up in my possession. That's been played perhaps twice in 10 years. Every time I play it, I do think it's stupendous. But there's nothing that pulls me back to it.

All that Hermit of Mink Hollow, Something / Anything stuff   I had that taped off of someone for years. Remember being mildly beguiled for a while.... but it didn't stick.

If I'm honest, the only thing I  ever actively crave hearing is "Open My Eyes".

And now I remember: at the end of this drunken evening (sluiced by a steady flow of astronomically priced - this being Norway - vodka sours),  as we all stood on the snowy pavement outside before dispersing,  I did ask him if he was going to play "Open My Eyes" at his gig the next day.  (We were both "performers" at a music festival). Purely making conversation, since I had no plans to attend the concert and in fact was moving on to another country.  Somewhat tartly he replied that it would be rather hard to do the song live, don't you think, with just one guitar?

No doubt TR finds this early Nazz number somewhat jejeune...  perhaps he finds it annoying when people harp on about the late Sixties and early Seventies stuff, and never mention the Eighties conceptual-technical projects, or the CD-ROMs or whatever....

Zappa-like in many ways: the embrace of the latest cutting-edge technology, but results that are surprisingly old-fashioned and florid.  (Thinking here of my repeated efforts to find anything memorable or mind-blowing in Uncle Meat).

Made with the NewTek Video Toaster, whatever the fuck that was... As if the images could redeem the runny stuff trickling sickly into your ear holes!

The only other thing I remember TR saying during that Oslo night was a bitter bout of complaining about Andy Partridge and the whole sour saga of his production of XTC's Skylarking.

Final thought: "Bang on the Drum All Day" is one of the most heinous things ever committed in the name of rock. Is he essaying a Trinidadian accent there in the chorus?

Posted by SIMON REYNOLDS at 9:49 AM 4 comments:


The Eighties seems as far away in time, and as cruddy in production values / generalized TV aesthetics, as the Fifties and early Sixties did back in the Eighties

but the lighting, the camera movements, the stilted pacing...

feels so very long ago


Posted by SIMON REYNOLDS at 9:46 AM No comments:

And pretty cool electronic music pops up in a few other places.

But it's not on the soundtrack, which is all John Barry - plus that Fred Neil written / Nilssen sung tune "Everybody's Talkin'".

Seems those bleeps and bloops were built by Sear Electronic Music Production.

Founded by this guy Walter Sear

This is a whole album created by SEMP

Very much in the generic mold of the Moog-sluiced novelty albums of that time - groovy, Muzak-y toons lightly laced with a electronic tint. 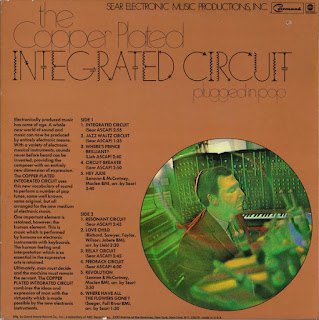 The obit says Sear did a lot of electronic bits for movies - but BFI lists only Puzzle of a Downfall Child (never heard of it before - starred Faye Dunaway, apparently tells the tale of a top model's mental and emotional breakdown "in intricate flashback style" - all sounds very late Sixties!).


Anyone know of any other films containing Seartronica?

Another question for the massive: is "Old Man Willow" literally the only good thing Elephant's Memory ever did, ever? I grabbed the album on which it appears in a used record store in NYC back in the early Nineties only to be most disappointed to find that nothing else on the LP resembled "Willow" in the slightest.  It was much more raw 'n' groovy psychedelic-backlash era rock. And then Elephant's were John & Yoko's backing band on one or other of the albums.

"Willow" is very much proto-Broadcast / Trish K in vibe - a sister-source to United States of America and White Noise.

Perhaps I should have included E's Memory, just for that one song, in this piece on synthedelia.

"I'll be glad to see the back of that planet"


Posted by SIMON REYNOLDS at 8:43 AM No comments:

another from the London Community Video Archive

This hour-long programme made for the BBC introduces the programme to the audience, which is shot in a studio. Short films are interspersed with studio footage with films examining, in some instances in a comical fashion, the issues facing the East End of London. Themes examined include the benefits system, lack of social housing in the area, immigration and the changing culture of the area. In the news section the E1 Festival is promoted, along with school closures and high truancy rates discussed. There is a tongue-in-cheek film review of Tunde’s Film and a brief clip of the film is promoted. Other features consist of a ‘Dishes of the East End’ segment featuring the iconic Fish and Chips. A play called ‘A Five to Six Minute Play’ follows featuring Tunde Ikoli, where he talks to an older man about the issues both face trying to find work. A community video short also features called ‘Our Kids’, truant school children are interviewed about why they are skipping school and what their hopes are for future. The programme ends back in the studio where the group discuss ‘Our Kids’.

Maggie Pinhorn
Posted by SIMON REYNOLDS at 12:07 PM No comments:

glimpse of the entropic, grinding-to-a-halt vibe of music culture in the mid-70s - the E1 festival of July '74, in Stepney

notable historically for appearance near the end of Elvis Costello fronting his first band Flip City - and essentially doing Get Happy! six years ahead of schedule.

(via Open Culture - and the London Community Video Archive)

More 74-made films from LCVA

top of the Poplars


Powis to the people!

power to the Pepys

All the fun of the fair (is this Deptford?)

Oooh a good one from a few years into the New Wave era - what looks like kids in class (further ed college? poly?) pretending to be punx?


And one from '72 on squatting

Posted by SIMON REYNOLDS at 11:38 AM No comments:

gets increasingly strange from about 20 minutes in


Posted by SIMON REYNOLDS at 11:22 AM No comments:

or perhaps (in rockier mode) something like Hillage meets Bootsy

but - in both cases - not quite as good as either of those analogies might suggest
Posted by SIMON REYNOLDS at 6:20 PM No comments: