The wide-brim hat seems to go hand in hand with a non-rocking, wussy innocuousness, combined with an over-layered, slightly florid thing

It's these fine fellows I think who are the actual archetype - and again I'm not sure if it's even "wide brim", it's just hat-wearing - that was a real  thing on the indiepop scene 1984-85-86

Ha! Look! I was right - in this TV clip from the show Wired, the presenter who's introducing Martin Stephenson and the Daintees is wearing one of those hats, and he stops right in front of a hat shop, and he says "they'll be banning hats next" (in reference to some Thatcher government measure against homosexuality). 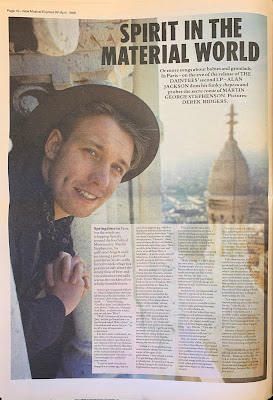 Who else had hats?

Who - at least for the duration of the first four singles - are not Bad Music Era at all -  in fact I really liked them.

Interviewed them around the (disappointingly wussily-produced) debut album Giant, which did have a few lovely dreamy tunes like this one -


- but overall got a bit sickly and spoiled by overproduction.

You can forgive any hat-wearing tendencies when it's muscular driving trancebop like "Well Well Well", "Move Me", "It Will Come" - but when it gets all wispy and wimpy, the hats start to seem like the problem...

I might have fingered Microdisney as culprits, but on quick glance can't see much hat-wearing evidence and I'm not going to start poring through old videos, that's for certain (never cared for their supposedly subversive-MOR sound)

Aha - Virginia Astley had a big old hat in the photo sessions around her second album, 1986's Hope In A Darkened Heart, as you can just about see from this cover.

I am not sure that a woman wearing a hat of this kind is so potentially culpable as it is when a man does it, though. However it does go hand in hand with some wispy, florid, non-rock-instrumentation-bedecked music, though, in Ms Astley's case.   The strawberries-and-cream dove-toned Englishness of her music would have been something I'd not have been able to stomach at the time - but nowadays, an aging expatriate pining for the rolling hills and horse chestnut trees of the motherland, I have developed a fondness for it. Perhaps it can even be considered part of the proto-canon for hauntology.

The Blue Nile put out an album actually called Hats, of course - with a chap on the front cover wearing a hat -  but I don't think they took to going hat-clad onstage or in photo sessions. The Nile didn't really have a look as such - nor would I be able pick any of them out of a police line-up.

Lots of good suggestions coming through in the comments, e.g. Fairground Attraction

Andrew Parker sent through some thoughts:


Michael Stipe (yes, even before the early 90s)

Andy Prieboy (Wall of Voodoo) - the 'western' style was in vogue for a while in the mid 80s.

Blixa Bargeld (a bit later, circa The Weeping Song, 1990)

I think with Pew and Bargeld the hats have a more macho evocation than the wide-brim thing I'm talking about.

Pew's whole image was a sort of Texan shit-kicker, a sartorial foretaste of the Southern Gothic direction that the late-period Birthday Party and early Bad Seeds would plunge into.

My favorite Pew quote, about the early skinny-tie art-pop of Boys Next Door - "we made the unpardonable error of playing to thinkers rather than the drinkers"

And yeah with the Mission / Nephs and with G'N'R, it's definitely something else than the Daintees / Woodentops idea


(the Nephs went so far as to put "desert dust" on their hats for the full spaghetti western wilderness look - actually flour, which made them the butt of endless Melody Maker jokes about Mother's Pride)

Perhaps what is needed is a typology of Eighties alternative music millinery! c.f. the leather cap look mentioned in the comments.

Another nomination: Lindy Morrison (Go-Betweens) on the cover of Liberty Belle ...


Slash's hat could have been worn in the late-60s Haight-Ashbury scene, which was an inspiration for the paisley underground scene of the mid-80s.

Not sure goth should be eliminated as the bands were intentionally evoking the distant past (Victorian era lace and boots).

Other nominations: Mike Scott (The Waterboys), and moving further from alternative music Boy George, the woman from The Thompson Twin

I was going to mention the Waterboys and then forgot, although their sound is a bit more epic and windswept (the Big Music - cf. the hatted tendency of U2 circa Joshua Tree)

single got to #3 in the UK charts

never saw that one either

implausible but true: one of the most important records in hip hop history (nd still being sampled to this day)

a number 13 hit though


another single (and flop) off of Waltz Darling


a thief, a scoundrel, a mis-manager - but hard not to think fondly of  McLaren, for the ideas, the rollicking music paper interviews, for the Sex Pistols, Bow Wow Wow (and Adam Ant, effectively), for "Buffalo Gals"

Here'a striking fact - out of the ex-Pistols, and yes I include him as a member of the band - Malcolm McLaren has had more hit singles than Glen Matlock or Jones + Cook, and more or less an equal showing in terms of success as John Lydon *

Which corresponds to my own post-Pistols apportionment of interest: Malcolm and Johnny's later exploits I followed obsessively, deep into the Eighties; the other three, not so much, not so much....

I.e. the lure was the vision + attitude, rather than the sonic substance, per se

Jones + Cook, as The Professionals, got to #43 with "1-2-3" and had a novelty Xmas minor hit "A Merry Jingle" as part of the Greedy Basstards (with Thin Lizzy), a punked-up medley of "We Wish You A Merry Christmas" and "Jingle Bells",


** a mystery worth pondering at a later point: how come there's no Matlock melody as immortal or potent as the tunes he wrote while in the Sex Pistols. The mystery of group energy. Something about the way the notes Glenn wrote interacted with the properties (limitations / powers)  of Rotten's voice and also what Jones was doing to generate magic. Reconstituting a group of able and compatible talents in a later situation, and in presumably a much less frictional setting, led to nothing like the same results - despite it being the same core musician with the same melodic and harmonic traits.

reminds me slightly of this

and there is a connection with this

the best disco was the commercial successful disco


Posted by SIMON REYNOLDS at 8:06 PM No comments:

the french and their synthesisers

Posted by SIMON REYNOLDS at 9:57 PM No comments:

Posted by SIMON REYNOLDS at 9:57 PM No comments:


Posted by SIMON REYNOLDS at 8:20 AM No comments:

Posted by SIMON REYNOLDS at 6:45 PM No comments:

in love with love

Posted by SIMON REYNOLDS at 10:55 AM No comments:


Posted by SIMON REYNOLDS at 11:10 AM No comments:

Posted by SIMON REYNOLDS at 6:34 PM No comments: