The beginnings of the  Bad Music Era

It wasn't all bad though

Some of it was great

But it was a peculiar directionless period when things got a little bit... wet (wet, wet).

Like new pop without either the awkwardness OR the ambition - just polished and clever and cosy.

Probably I did but they've evacuated themselves utterly from my memory

But that's a slight digression from the main drift, inspired by the Kitchenware tape, which is that phase when a lot of hip-to-be-square moves were being made

Microdisney saying they aspired to be MOR, admired Andrew Gold

It was some kind of big gesture of performative wannabe-mainstreamness when Roddy Frame got Mark Knopfler to produce the Knife album, and Aztec Camera did the cover of "Jump"

Paddy Mc talked about what a cool cat Paul Mc was

Which is true but it was very much a statement then (given "Ebony and Ivory" and "The Frog Chorus" were his most recent hits).

The Kane Gang started out a bit soulcialist and stalwart, like a Wham! who canvassed for their local  Labour Party candidate in the election of 1983.


Notably part of the "headwear" phenom of mid-80s NME-beloved indie-ish music - small cap division rather than than wide-brim hat.

Christ, this is bad

No really, it did. (Helped by the Tears for Fears /"Everybody Wants to Rule the World" style promo no doubt).

Actually went to the release party for that album, on a boat on the Thames - but only cos we liked a free drink at Melody Maker. Plus Joy was going back to NYC after a year of studying abroad (ie in London) so Stubbs and I wanted to give her a good send-off. Or at least an inebriated send-off.
The unutterably bland polish of this Kane Gang album ought to be haloed with poignancy and lustrous memory then, but I cannot remember a thing about it.

And this lot - the singer a close mate of Alan Horne

So oddly both streams or strands seemed to come from Postcard, from a fatal confusion within Orange Juice... Or at least, within their music, it was a fruitful  confusion, a tangle of contrary impulses (raw versus slick, Velvets versus Chic) that came out wonderfully. But when separated out those impulses led on the one side to Pastels and on the other to Del Amitri

Even Davy from the Fire Engines tried to go pop, go slick

Somehow I've not mentioned Wet Wet Wet yet - who I actually interviewed (for the Observer - nice lads, at least the non-singing ones - never met Mr Pellow), and who scholars of the era will know derived their name from a line in a Scritti song from Songs To Remember, "Gettin' Havin' and Holdin"

Yes a lot of this would-be slick, soulie-Steely-wannabe mid-80s stuff came from Scotland or from Northumbria.

Deacon Blue - named after a Steely Dan song, in fact.

I wonder what it is that keeps drawing me back to the Bad Music Era.

Well, there's the motto at the top from Mr Eno - "really awful is more interesting to listen to than pretty good" . But in a lot of cases, this stuff isn't even awful, it's just nothingness, neither one thing nor the other. So for me it's  more like a sort of personal decadence in my taste and listening habits, where I find it perversely fascinating to contemplate mediocrity and misguided directions.

And then there's also something to do with remembering the savage disappointment of the          post-postpunk moment -  that feeling of entropy and creeping crapness cropping up all across the spectrum, from the alternative underground indie-charts scene to the toppermost of the poppermost...  everything going wrong

Partly it's to remind myself that  soon enough it all went incredibly right ... the lull turned to a surge

But it's also a cautionary tale... about the dangers of cautiousness, in fact... what happens when the will weakens... when people start playing the game

I think I'll do the Style Council and Respond Records in the next installment. 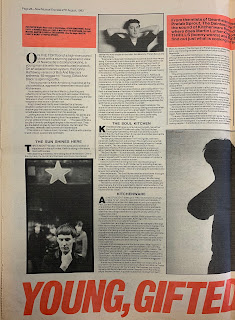 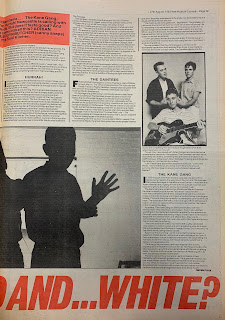 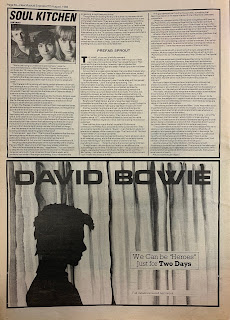 the above an excerpt from this


That's pretty odd, letting a guest musician (Erkki Kurenniemi) appear solo on your band (Wigwam)'s album - let them have a whole weirdtronica track to themselves, albeit a short one

I guess experimental Finns stuck together in those days

Wigwam's own keyboard player did a whole synthesizer solo album

never quite gotten around to getting into Wigwam

Posted by SIMON REYNOLDS at 8:30 AM No comments:

Mâche it up selector


Posted by SIMON REYNOLDS at 10:31 AM No comments:


[all via Claude Nobbbs)
Posted by SIMON REYNOLDS at 8:00 PM 3 comments:

Labels: MOUTH MUSIC, this was tomorrow

Not so long ago I was wondering whatever happened to Public Information's plan to release electronic music by radical dance choreographer Ernest Berk...

.... and into the breach steps Johnny Trunk with a release from a few months ago that completely bypassed me (even though it came out more or less when I did that post) 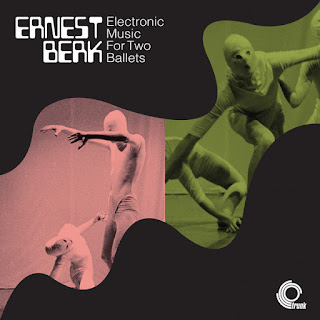 You can hear each side of the album here and here


"There are very few Ernest Berk recordings. As a pioneering ballet dancer, instructor and electronic music artist he was surprisingly prolific. He made music for all sorts of uses  he even made library music and of course this very album of his music for two of his ballets. Towards the end of his life Ernest Berk gifted his entire collection of works, tapes, documents and all to the Historical Archive Of The City Of Cologne. Tragically, in 2009, a large part of the archive collapsed (due to the construction of an underground railway) destroying 90% of the everything. Berk's tapes have tragically never been recovered. They are assumed lost forever. So these two recording issued privately circa 1970 remain precious to say the least. There were no masters, this new pressing was simply transferred from the original copy held by his family. We have done our best to restore the sound. I have also reproduced the original notes, and from what I can gather this album may well have been pressed and given away as promotion for the Dance Theatre Commune. The original album came with a small piece of paper with a geometrical squiggle stuck on the front. We have constructed something a little more complex to give a hint of Berk's life and important work.

Sleevenotes for the original press:
Ernest Berk was born in Cologne, Germany and came to England just before the war. He started a dance company in London and wanted a sound especially suited to his experimental dance style. This he found in electronic music. Berk feels that electronic music is able to express the feelings of contemporary society in a more potent and communicative way than conventional forms of music. This is not to say he disregards traditional forms of music, rather, he blends the best elements of both, creating a new and exciting sound. Over the years he has gained an international reputation as a composer of electronic music. His works have been heard in Berlin, Cologne, Florence, Edinburgh, United States, to name a few. He has scored a number of films, plays and ballets. Ernest and his wife, Ailsa, opened a new studio at 52 Dorset St, W1, in April, 1970 where they give tuition in modern dance, electronic music and percussion. They also teach at the Guildhall School Of Music And Drama and at ILEA Institute (Stanhope). The studio is headquarters of the Dance Theatre Commune which the Berks created in order to combine their work in dance and music with those already working in similar spheres."

Here's a substantial cache of Berktronica stashed at Soundcloud by Christoph Winkler, the chap who organised the Berk tribute  "The Complete Expressionist"  staged in Berlin in 2018.


A couple of these tracks sound more like crimps than Berktronica

Posted by SIMON REYNOLDS at 6:24 PM No comments:


Posted by SIMON REYNOLDS at 2:24 PM No comments: 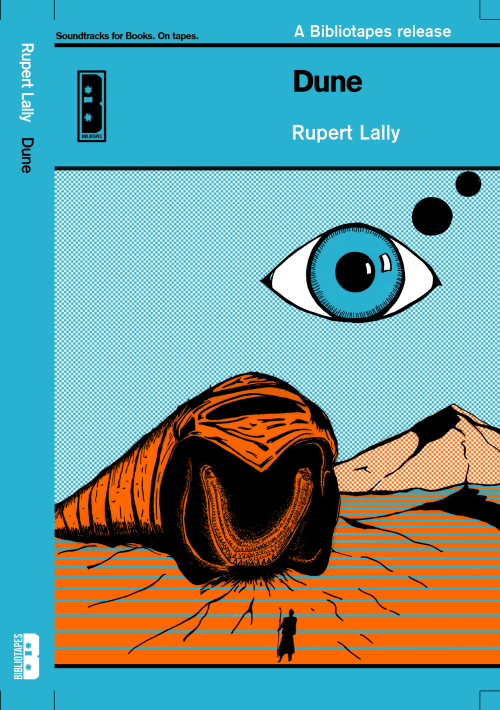 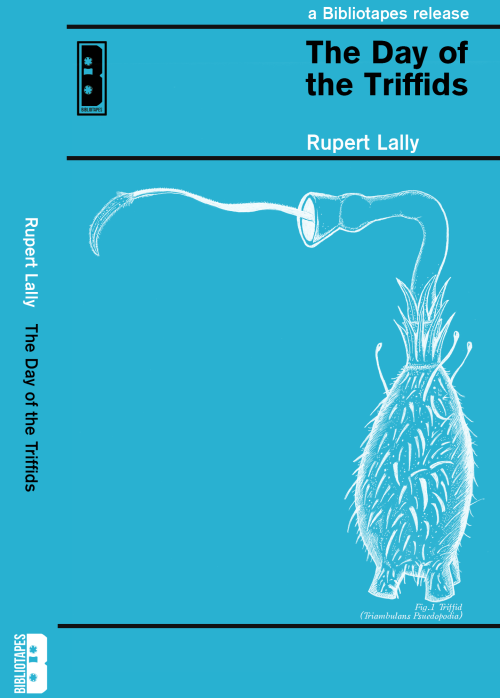 Posted by SIMON REYNOLDS at 3:51 PM No comments: 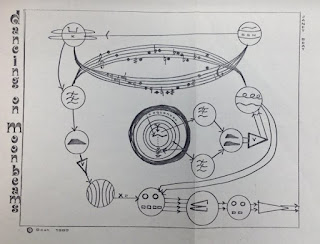 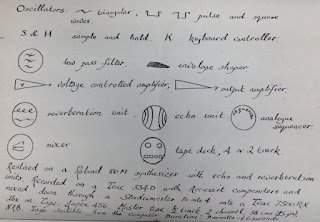 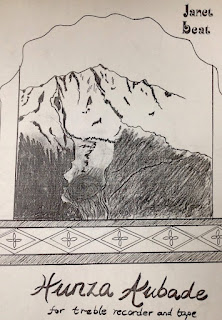 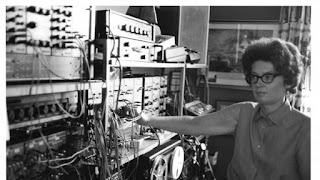 Janet Beat back in the day

here's some of her tunes

[via Robin Rimbaud]
Posted by SIMON REYNOLDS at 10:20 AM 1 comment:

Posted by SIMON REYNOLDS at 12:00 PM No comments:

spacey synth excursion, from one of my favorite albums ever - Harmony of the Spheres by Neil Ardley

can never decide if that one is my favorite, or this next one - which fuck me, they apparently released as a single!

he also did a library music track called "Mirage"

shared KPM record of 1971 with this chap


Never quite got round to getting into A Kaleidoscope of Rainbows, despite its wonderful title, or indeed A Symphony of Amaranths - i should remedy that

from the Folkways album Street and Gangland Rhythms, Beats and Improvisations by Six Boys in Trouble -
"This album features jams on homemade percussion instruments by six 11- and 12-year-old African American boys living in New York City public housing, about 1955. These young, untrained musicians improvise the tunes and tales of their upbringing on this rhythmic release and draw inspiration from family folk traditions and popular radio and juke box hits of the era. "

concept if not outcome reminded me of this lot

"The Junk Yard Band is a go-go band, founded in the early 1980s by children playing on improvised instruments. They are best known for their song, Sardines."

oh and there's also this of course

(both via firefinga at dissensus)
Posted by SIMON REYNOLDS at 10:32 AM No comments:


Posted by SIMON REYNOLDS at 8:27 PM No comments: