Keith Roberts, Pavane
Alternative history/counterfactual set in England where the Reformation never happened, Roman Catholicism dominates the country, and science has been suppressed.

Ward Moore, Bring the Jubilee
Alternative history in America where South won the Civil War, an unacknowledged precursor to steampunk in terms of technological backdrop, very well written and characterized, full of great historical jokes and inversions - e.g. in the impoverished, backwards remnant of the United States of America, the transcontinental railroad was never completed, the Native American tribes never defeated, and Deseret (the original Mormon name for Utah) still has polygamy, while a Klu Klux Klan-like militia called the Grand Old Army fights against the overwhelming economic influence of the Confederate States of America, a/k/a those damn Southrons.

Robert Sheckley, Mindswap.
The exact plot escapes my memory – something involving a guy who ends up in an alien body and his attempts to get home, involving jaunts across many strange planets - but Sheckley is that rare thing, the genuinely hilarious s.f. writer.

John Brunner, Stand On Zanzibar and The Sheep Look Up.
These weren’t quite sequels but more like companion books, both set in an overpopulated future, Sheep I think nearer the present and more polluted and ruined, Zanzibar more about pop cultural overdrive, the pressures of overcrowding. Both excellent.

Frederick Pohl and CM Kornbluth, The Space Merchants  and Gladiator At Law
Possibly my favorite s.f. book ever - certainly the most reread. Another one set in an overcrowded, ecologically ruined future, this time a world dominated by advertising agencies. Written in the 50s circa Vance Packard and The Hidden Persuaders but surprisingly not dated at all and probably has renewed interest because of Mad Men and our culture of branding, Facebook ads, micro-targeted propaganda etc.   Pohl and Kornbluth wrote a bunch of really excellent books both separately and together – they belonged to this cabal of NY-based, mostly Communist or left-aligned writers who called themselves the Futurians, so the anti-capitalist slant of Space Merchants makes sense in this light.   Gladiator At Law, also excellent, is set in a similarly dark, corporate dominated future, where the masses are kept happy by a revival of  Roman style bloodsports

Walter Miller, A Canticle For Leibowitz
Absolute classic set in the Dark Ages several centuries after world war three, with monks who preserve the lost knowledge and painstakingly copy onto parchment the circuitry diagrams for machines they no longer know what they were for. Beautifully written and wry

Alfred Bester, the Demolished Man, and Tiger, Tiger (also published as The Stars My Destination)  Two more classics. The Demolished Man involves a future where telepathy has been developed and so has teleportation ... and to be honest my memory of the plot/scenario momentarily fails me, but it’s.... great!   Tiger, Tiger – ditto, I recall more particular amazing scenes.  A great stylist, though, is Alfred Bester and generally accredited as a master.

Harry Harrison, Make Room! Make Room!
The book that was turned into Soylent Green but about 10 times superior to the movie. A very grim and gritty, well imagined scenario of overpopulation and resource depletion in New York circa 1999. ‘Soylent’ is not “made out of people” as in the hokey Charles Heston  movie but is just one of the dreary processed foodstuff that people subsist on along with krill burgers and weed crackers. The rich go to “meatleggers’ and “meateasy’s” where they can get some dog or if they are really wealthy and connected, a sliver of beef steak. 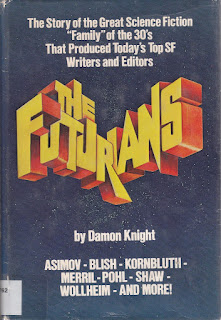 Originally wrote this for purposes irrelevant to go into at this juncture - but would obviously add to the list: Philip K. Dick The Man in the High Castle (and a couple of other PKDs), several J.G. Ballards (The Drowned World, High Rise, others), an Aldiss or two (Greybeard, Hothouse) Lem's Solaris and Fiasco definitely, possibly Christopher Priest's A Dream of Wessex. And I suppose Fahrenheit 451 is undeniable.

Ooh, and most of John Wyndham - particularly The Chrysalids (that should be a movie, I think) and The Midwich Cuckoos and Chocky, but you can't deny The Triffids.

Out of recent years reading in the genre, I don't think anything would get added to this core list, which was consolidated in my mid-teens - except for Olaf Stapledon's First and Last Men, which I just read a few months ago, and is a visionary work.

Short stories is a whole other ball game...

Major science fiction writers that I have never read: Asimov, Frank Herbert, Arthur C. Clarke, Heinlein (not entirely sure actually that it's zero with him - but certainly nothing has stuck in the memory), a number of other surprising ommissions...
Posted by SIMON REYNOLDS at 10:20 AM