(in rough chronological order, songs by honkies that either include a rap section or are wholly rapped)

The Fall (the white (c)rap that talks back; although when Mark E sez "Crap Rap" he's talking about speed-rapping i think

Bow Wow Wow "C30 C60 C90 Go!" - one of the verses on this is very close to rap , but most of this song floats around in a zone between playground chant / skipping rhyme, highly percussive singing, pop-punk, and early rock'n'roll in that Bo Diddley / "Iko Iko" mode. Ironically this came out well before McLaren was taken to the Bronx (when Bow Wow were making their NYC debut I believe) and exposed to hip hop, scratching, Bambaataa etc, resulting in his own early bid for white rap godhead with "Buffalo Gals".

And various offerings by Ian Dury but mostly "Reasons To Be Cheerful" which he himself claimed was the first rap song (half-jesting, half-serious) and which came out in July 1979.

So maybe Dury wins it, with Ari Up coming sort of second for the actually-inspired-by-hearing-rap-records-while-in-NYC, but really-a-bit-too-screamy-and-counter-groove-to-really-be-rap "In the Beginning there Was Rhythm" (March 1980)  and David Byrne coming second-equal for the more tightly rhythmic if stiff-necked WASP-y "facts are twisting the truth around" section of "Cross Eyed" (off Remain In Light, winter 1980) .

apparently Los Angeles rap sextet Rappers Rapp Group - in operation from the late Seventies -  had a white member, DJ Flash - but they are barely known and have a shit name so I am going to say that the majority-blackness cancels out the honkiness. They also did not get anything on wax until 1982. 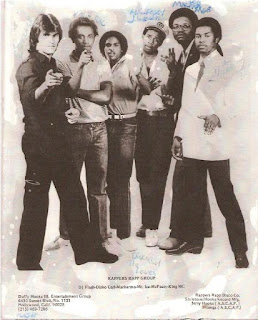 Andrew Parker points out that the first rappers were actually Vikings - and rap then was called "flyting" or "fliting" - "a contest consisting of the exchange of insults, often conducted in verse, between two parties."

"Flyting is a ritual, poetic exchange of insults practised mainly between the 5th and 16th centuries. The root is the Old English word flītan meaning quarrel. Examples of flyting are found throughout Norse, Celtic, Anglo-Saxon and Medieval literature involving both historical and mythological figures. The exchanges would become extremely provocative, often involving accusations of cowardice or sexual perversion....

.... In Anglo-Saxon England, flyting would take place in a feasting hall. The winner would be decided by the reactions of those watching the exchange. The winner would drink a large cup of beer or mead in victory, then invite the loser to drink as well.

"... Flyting became public entertainment in Scotland in the 15th and 16th centuries, when makars would engage in verbal contests of provocative, often sexual and scatological but highly poetic abuse.

Or was it the Ancients?

"Hilary Mackie has detected in the Iliad a consistent differentiation between representations in Greek of Achaean and Trojan speech, where Achaeans repeatedly engage in public, ritualized abuse: "Achaeans are proficient at blame, while Trojans perform praise poetry."

"Taunting songs are present in the Inuit culture..."

The comparison with rap is made by Wiki person:

"Flyting is similar in both form and function to the modern practice of freestyle battles between rappers and the historic practice of the Dozens, a verbal-combat game representing a synthesis of flyting and its Early Modern English descendants with comparable African verbal-combat games such as Ikocha Nkocha.:

There is also a Finnish tradition called kilpalaulanta - duel singing.

And from the comments, Russ Tuffery suggests

Unlike the other examples where there's an earnest attempt to actually rap and do it proper, this is a spoof - a deliberate failing of rap. The dude impersonating Alan Whicker (TV broadcaster with a nasal droning voice famous for his globe-trotting series Whicker's World) is playing up stiff-necked English-have-no-rhythm stereotypes.

And Fernando Ramirez Ruiz nominates 'Der Kommisar' by Falco - which is indeed a bit of white rapping.

C.f. "Rock Me Amadeus" which is less rap and more what I'd call "funkytalk" - along the lines of  Faith No More's "Epic" and Cameo's "Word Up"


CJ points out that I somehow forgot to include Wham!, mentioning "Young Guns Go For It" - but I believe "Wham Rap (Enjoy What You Do?") predates it  - both from 1982


Is this rap or just someone trying to do a bad honky imitation of James Brown?

Posted by SIMON REYNOLDS at 8:56 AM