In celebration of Anne Beatts  (RIP) - the creator of pioneering 1980s geekcom Square Pegs.  Dig the New Wavey color-scheme of the intro, the gawky-sassy uncool-cool theme by The Waitresses, the episode where Devo perform at a bat mitzvah, and the high school Noo Wave band fronted by Johnny Slash.

Tribute to / interview with Beatts by Joy Press.

The Devo episode at Dailymotion 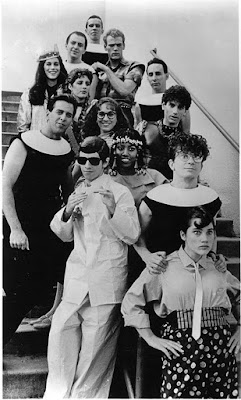 For context - at that time on American network TV, if anything recognisably punk or New Wave featured, which was rare indeed, it was almost always as ridiculous caricatures of  troubled / dangerous youth e.g.

Posted by SIMON REYNOLDS at 4:46 PM