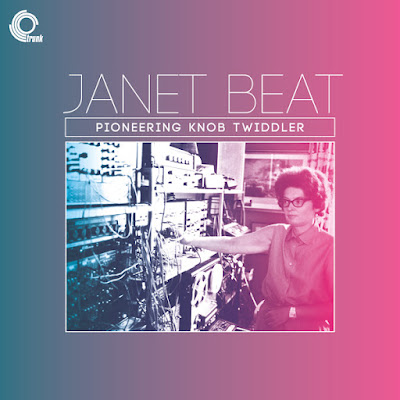 You can buy the comp here

"Before we go on, Janet Beat does exist. This is not some invented composer, cunningly dreamt up so I can sell some modern sonic noodlings as old ones to unsuspecting record buyers. I say this as it has happened in this market before and her name could easily arouse some suspicion. But yes, Janet Beat actually exists and she’s certainly one of the best examples of nominative determinism I have ever personally come across. However, even though Janet Beat does make music, she does not make beats.

"Very few people have heard of her or heard her music. And, with this release, as we are entering a rather crowded musical market (one full of wondrous new old discoveries, represses, reissues etc), I thought hard about what to call it. Having batted about things like “Electronic Lady”, “The Beat Goes On” and other such obvious tripe, I looked long and hard at the photo she sent me of her in her home studio in the 1960s. The one on the front of this sleeve. The album title quickly became obvious, and I sent it over to Janet explaining that although it was a little suggestive, it was true and would work very well on lots of levels. It was also relevant and a little attention grabbing. Janet instantly replied and gave me the OK, saying that as she was over 80, she’d leave the cool decisions to me.

"So, who exactly is Janet Beat? She’s written a small bio for us here, but I first came across her via legendary Glaswegian collector and chum Andrew Divine, who mentioned an electronic cue on a 1981 privately pressed LP by the Scottish Society Of Composers. I tracked her down and suggested we release all her music to a wider audience. Janet was thrilled by the idea, and our first long conversation revealed much about the battles she’d fought following her calling of a life in music.

"She’d submerged herself into tape manipulation and concrete composition in the early 1960s. This went against her father’s wishes (music was no job for a woman) and he ended up using all her original tapes to hold up his tomato plants in the kitchen garden. So, although she was composing and creating wild music in that period, it’s all gone and will never be heard again. She battled on with her music through the following decades, even playing live at specialist electronic events and concerts. But here, where you’d expect enthusiastic support, she found that fellow male musician would sabotage her equipment, steal power leads, damage her chances of playing live whenever they could. I found these stories quite shocking - having never heard such things from any other female musician of that early period. I knew the career was a tough one, but never knew it had reached such unpleasantly low levels. But now Janet has told me what she went through, I'm sure she wasn’t alone. And this could possibly explain the dearth of female artists emerging from the early scene.

"Musically on this album we have her electro-acoustic compositions that have survived, dating from 1978 onwards. As you will hear, Janet is a unique talent, conjuring all sorts of sublime musical visions from limited resources. Some of it sounds like Forbidden Planet, some of it sounds like it has come from another planet."

"Janet Beat (b.1937) was always fascinated by sound. As a child, she would put her ears close to struck objects and hear the harmonics which she called “rainbow sounds”. She also put her ears against tree trunks and the ground to hear the rabbits thumping. Her first piece of music was written for her toy piano when she was three and a half years old, which she knew how to write down. She studied music at Birmingham University. In the late 1950s after hearing some of Pierre Henry's sound poems, she became interested in musique concrète. Then she began experimenting in this field herself. When lecturing at Worcester College of Education (now Worcester University) with the help of the physics lecturer she began a course in electronic music in the mid-1960s. In the 1970s, she initiated electronic and recording studios at the RSAMD (now the Royal Scottish Conservatoire). Later she lectured on multisound diffusion at Glasgow University. She overcame much opposition to her creative career from parents and the musical world as women “do not do” composing and technology. Even her father used her earliest tapes to tie up his plants in the kitchen garden. However, despite all opposition she has gained recognition and commissions worldwide which have included a Lifetime Achievement Award from Scottish Women Inventing Music (SWIM) as a composer, music educator and writer on music."

Some more Janet Beat music not on the compilation