if at first you don't secede

In the '70s, there was a lot of talk about devolution and separatism: regions and former nations long subordinated within federal or majoritarian dominance, now wanting to break away as independent states. A big thing was the resuscitation / protection / preservation of minority languages waning or on the verge of extinction.

You had the Welsh independence movement which had its political wing and then its extra-parliamentarian front (blowing up holiday cottages owned by English people, a tactic of deterrence / retaliation against the effect of local property being priced out of reach of locals) alongside that big push for Welsh-language television. Scottish nationalism obviously (still with us, stronger than ever). But you also had a Free Cornwall movement, I seem to remember, also keen to save the Cornish language from disappearing. I can't remember if there were any other separatist movements within the UK (independent Manx - well, it's already pretty autonomous isn't it, The Isle of Man?). The Continent was rife with centrifugal tendencies as well - Corsica, the Basques, an independent Brittany movement, and a Northern Italy breakaway push (still with us in the form of Lega Nord per l'Indipendenza della Padania).

I found all this really fascinating as a teenager. It related to my interest in alternative history - just the idea that the present-day map could have ended up looking quite different (Burgundy as a kingdom into the 20th Century! *). Which in a way was just an extension of the non-alternative history fact that the map has changed frequently over the centuries (the Moors conquering most of Iberia, for instance... or the Ottoman Empire extending almost to the walls of Vienna). The interest in separatism also related to my passion for science fiction: for who was to say that the map of Europe wouldn't look quite different in the near-future? And that would actually transpire, in fact - e.g. the disintegration of Yugoslavia and the re-Balkanisation of the Balkans, which I don't think anyone expected in the 1970s (nor did we anticipate the collapse of the U.S.S.R. and the whole Soviet sphere).

In one of the newspapers around then (this is '78, '79) there was an article on all the separatist movements across Europe -  some of them pretty against-all-odds in their ambitions and hopes. I didn't save the whole thing but in my scrapbook of that time I glued in the somewhat crude-looking map that went with the story, plus some paragraphs that particularly caught my eye. 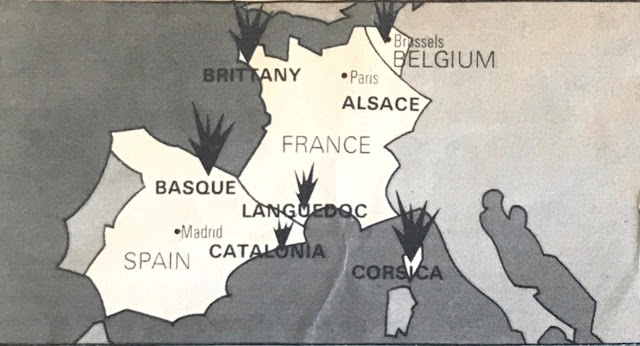 The first one that particularly grabbed me was this Languedoc / Occitan  movement that didn't just want to break off Provence from the tentacles of Paris, but also wanted to absorb chunks of Northern Spain and Italy. ** 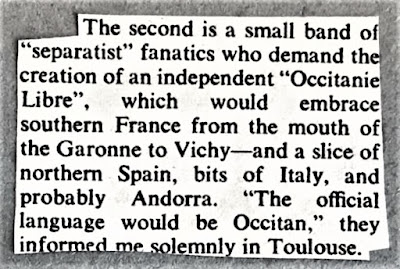 In this next bit, I was taken not just by the idea of the Flemish separatists within Belgium, but the fact that should the Flems (?)  have succeeded / seceded, the Walloon remainder could then have been reabsorbed into France (if two parties in favor of that had had their way) or, even better, it could have been amalgamated into a sort of SuperFrance,  a kind of Greater Francophone Federation. This was being promoted by a bunch of nutters who also had their eye on the French-speaking bits of Switzerland as well as Walloonia.

Posted by SIMON REYNOLDS at 6:54 PM