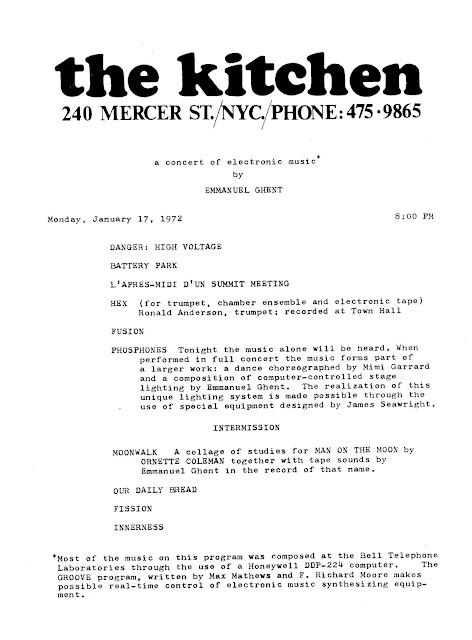 "In 1969, with the assistance of a Guggenheim fellowship that he had been awarded in 1967, he began a 10-year residency at the computer-controlled electronic music studio of the Bell Telephone Laboratories. Here, he began working with the GROOVE Computer System, which made it possible have real-time control over both music and lighting effects. With this program, he composed Phosphones (1971), his first collaboration with the Mimi Garrard Dance Company. This established the beginning of a long collaboration that Ghent had with Garrard and her husband, kinetic sculptor James Seawright. The score of Phosphones contained two tracks, a music track and a lighting one, which was an integral part of the composition. Phosphones was the first of five collaborations between Garrard and Ghent that took place between 1971 and 1974. In 1974, he began to create computer programs that would be equipped to make certain choices about pitch and rhythm. The computer came a “co-composer” of sorts." - from this obituary at New Music USA

From an interview / "informal discussion" from 1987 between Ghent and his daughter Valerie (also a musician):

Dr. Emmanuel Ghent:  We were doing all sorts of experimenting with what kinds of sounds we could make and how to control them. I think the first piece I wrote there (at Bell Labs) was using African drumming rhythms. It was called Battery Park. It’s based on standard African rhythms, except that the pitches of the drums are changing. Also, around that time I wrote a piece for violin called Helices. A lot of it was made on a kind of semi-random basis, where you could turn dials and change events within the piece. It was not very well controlled. But to come up to where I began getting the computer to compose, that comes up a few years later....  In 1970 I started working with some electronic circuits that Max [Mathews] had built, which made drumlike sounds. He called them resonants.... I used those to write a piece called Phosphones. At the same time it occurred to me that if we could use the computer to make music, if we had some way of translating the what are called ‘functions of time’, into some way of controlling theatrical lights, we could also control the lighting. Synchronize them. So that’s when Jimmy (Seawright) and I got the idea of “Hey, maybe we could even get the GROOVE program to also punch out paper tape which we could hook up to this old machine over here…” (the coordinome, invented by Ghent, described earlier in the discussion).

There is not a huge amount of Ghentronica readily available in the world  but another composition "Hex, an Ellipsis" for trumpet, instruments, and tape can be heard right here

Ghent also contributed to this recording

"released in 1969 in response to the first moon landing"

Woah, by chance (looking up someone else) stumbled on this motherlode of Ghentronica disguised as a Boosey & Hawkes library record  (although I'd have to buy the album in question to actually hear it, of course). (Julian House recommends  such a purchase).

James Reichert collaborated with Tod Dockstader on the album Omniphony, and Alcides Lanza is an Argentinan pioneer of electronic music - a huge amount of his work can be heard at this amazing repository of Latin American tape-music and electronic composition.

Obituary of Emmanuel Ghent nicked off the internet

Emmanuel Ghent, a significant contributor to the development of computer music and a noted psychoanalyst, died on Sunday, March 30. He was 77. His daughter, Valerie Ghent, explained that his death “was very unexpected and we are all still very much in shock.” She went on to describe her father as “an innovator, an inventor, a composer, a programmer, a brilliant analyst, and dearly loved and deeply loving man.”

Composer and vocalist Joan LaBarbara added: “Manny was more than a musician. For some of us, he was our protector and confessor; he guarded our souls, our demons and our private spaces and took our secrets with him. His gentle smile and quiet wisdom will remain in our hearts.”

Born in Montréal on May 15, 1925, Ghent’s interest in music began when he was 14 years old. He played timpani in the school orchestra and began arranging and composing works for small chamber ensembles. He further developed his talents by taking classes at the McGill Conservatory of Music while he pursued a major in biochemistry at the university. Balancing these two separate passions would define the rest of his dual-career. After receiving his bachelor of science, he attended the McGill University Faculty of Medicine for four years and graduated with highest honors as an M.D. in 1950. The next year, 1951, he moved to New York City, where he studied at the W.A. White Institute. He received his diploma in psychoanalysis in 1956. In 1961, he was hired as a faculty member at New York University and became an American citizen in 1962.

Between 1946 and 1960, very little of Ghent’s time was devoted to composition. He wrote a few chamber pieces including three duos for flutes, a wind quintet, and a string quartet, but it wasn’t until he completed a quartet for winds in 1960 that composition re-entered his life with the same importance it had held for him in high school. At this point, he began private studies in composition with Ralph Shapey. In addition to the influence of Shapey’s own music, Ghent was inspired greatly by the work of Edgard Varèse and Igor Stravinksy. Throughout the 1960s, he primarily composed chamber works that engaged multi-tempo rhythmic relationships and intervallic harmonic/melodic structuring. Often these pieces involved spatial separation between players. In order to help his players stay together in such adverse conditions, he invented the “coordinome,” a tape device that decoded one aggregate signal into individual tracks, which was transmitted to the performers via an earphone, allowing them to each have a personal conductor of sorts and maintain independent tempi and meters. Composer Morton Subotnick was working at the Bell Labs while Ghent was there. “My time with Manny was in the late 60’s, a time of experimentation, change, and excitement,” he remembers. “But, with all the change over the years, some memories remain fixed. Watching Manny work with the musicians wearing headphones and playing to independent click tracks is a memory fixed forever.”

This predilection for inventing new musical technologies attracted Ghent to the Columbia Princeton Electronic Music Center and in 1969, with the assistance of a Guggenheim fellowship that he had been awarded in 1967, he began a 10-year residency at the computer-controlled electronic music studio of the Bell Telephone Laboratories. Here, he began working with the GROOVE Computer System, which made it possible have real-time control over both music and lighting effects. With this program, he composed Phosphones (1971), his first collaboration with the Mimi Garrard Dance Company. This established the beginning of a long collaboration that Ghent had with Garrard and her husband, kinetic sculptor James Seawright. The score of Phosphones contained two tracks, a music track and a lighting one, which was an integral part of the composition. Phosphones was the first of five collaborations between Garrard and Ghent that took place between 1971 and 1974. In 1974, he began to create computer programs that would be equipped to make certain choices about pitch and rhythm. The computer came a “co-composer” of sorts. He also became interested in amplification of traditional acoustic instruments and often used them in conjunction with his electronic tracks. In the late ’70s, he revitalized his fascination with intervallic relationships and began constructing computer programs that dealt with the realization of intervallic groupings. The programs that he created were integral to the development of computer music and continue to be influential today. Throughout his career he also collaborated with a variety of artists including composers Ben Johnston and Ornette Coleman, sculptor Peter Nicholson, choreographer Gladys Baylin, filmmakers Lillian Schwartz and Ken Knowlton, trumpeter Ronald Anderson, violinist Paul Zukofsky, and violist John Graham.

Recordings of his music are available on Wergo, Capstone, and West Street Records and his music is published by the Oxford University Press and Subito. Shortly before his death, his daughter Valerie, a record producer, vocalist, and keyboardist, released a recording of “Songs for Children and All Their Friends,” a set of 23 songs that Ghent had written on the occasion of the birth of his youngest daughter, Theresa, in 1967. By the end of 2003, the New York Public Library Music Research division plans to make all of Ghent’s works, which he had already had transferred from analog to digital formats, available online.

And while his musical biography seems rich enough to fill up his days, Ghent maintained a part time psychotherapy practice through all of this and was also a Clinical Professor of Psychology at the Postdoctoral Program in Psychoanalysis at NYU. In 1988, he was instrumental founding NYU’s Relational Orientation program in psychoanalytic theory. He was also a < Supervising Analyst at the W.A. White Institute, an associate editor of Psychoanalytic Dialogues: A Journal of Relational Perspectives, and a member of the International Association of Relational Psycholanalysis and Psychotherapy (IARPP). He is also credited with the creation of the JLIST Computer Program and Database: A Psychoanalytic Journal Bibliographic and Information Retrieval System. According to his daughter Valerie, even at the time of his passing he was still “teaching, writing, supervising, editing, and planning many projects.” He was in the middle of teaching the first semester of a class he had developed called “Psychoanalysis and Buddhism.” He was a practicing Buddhist himself. He was an avid lecturer and writer on both musical and psychoanalytical topics.

He didn't just do electronic and computer music. And this - unfindable on the internet - is electro-acoustic. "The electronic tape was composed at the Bell Telephone Laboratories with the user of the GROOVE program and a Honeywell DDP 224 computer." 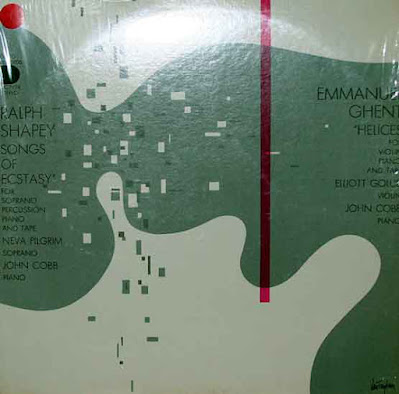